I never bought Diablo 3. I got it from an offer that Blizzard had where you commit to a year of World of Warcraft and you got a mount, Tyrael’s Charger, and you got Diablo 3. I had played the first two games and enjoyed them, but I wasn’t as hooked as a lot of people were playing them.

I played through Diablo 3 when it came out. I picked the monk class because it was the closest thing to a Paladin that they had (hand to hand combat and holy magic, including healing). I am a Lawful Good type of guy (if you played Dungeons and Dragons, you’ll understand that)  and I enjoy pretending that my job is to smite evil. The story was fun and the graphics were beautiful but there was no way in hell I planned on ever playing through that story again with a different class.

Fast forward a while and Blizzard made an expansion, Reaper of Souls, which introduced another class – a Crusader (close but still not quite a Paladin, come on Blizzard!) and it also put a fifth act in the story of the game. I purchased it much later when they had a sale and I picked it up for like half price but I never really played it.

One thing that I did not really pay attention to was they added a new mode to the game where if you beat the story, you got a new game play mode called adventure mode. You could go fight in any of the previous locations for bounties that had you do certain objectives and also a new thing called a rift which just spawns monsters and powerful boss monsters for you to kill for loot. Somewhere along the line they also starting doing these things called seasons where you start from scratch and have a multi-stage list of objectives to do in game that will earn you some cool cosmetic stuff for your character. I think they do it to introduce you to all the things you can do in the game.

With this adventure mode, it really breathes new life into the game. You can get recipes to make powerful items, the materials to make the items, a lot of gold, and of course powerful items to equip your hero with. They had just announced that a new season, number 4 would be starting soon so I hurried up to finish the story in Act 5 so that I would unlock Adventure mode and be able to start a seasonal character so that they could level up solely through Adventure mode.

I first tried a witch doctor class but I could not really get into it. I only got to about level 14 (out of 70) and then I tried a demon hunter and it was kind of boring too. I did not want to do another close combat class just yet, so I picked the wizard. Holy crap it was fun! I got this cold ray that was basically just like a freezing laser beam you paint the targets with and they die. Even better it upgrades to a disintigration beam that is the closest thing to plasma weapons you will get in a fantasy game.

What this country really needs is a good $5 plasma weapon.

Another cool spell I got was the equivalent of a Sith’s force lightning and I could make it jump to a total of 10 targets. I felt like the Emperor from Star Wars. 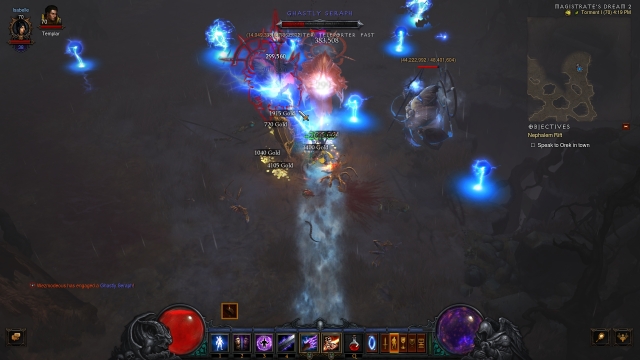 These seasons are supposed to last a few months I think. There were four chapters of objectives to finish to get the rewards. I pretty much blew through them all in a few weeks. It was extremely fun to play and even in small sessions I felt like I was making progress. Sometimes with other games you feel like you play all night and don’t really advance. But this is not a monthly subscription game like an MMO so I guess there is no need for the developer to try and keep you hooked. Maybe I just clicked with the class, but I am thinking I might try the barbarian or the crusader next before the season ends. Time will tell.

This entry was posted in #Diablo3 and tagged #diablo3. Bookmark the permalink.